For us, it is the interdisciplinary work that constitutes the real richness of the project. VÉgA is a product of the Egyptologists’ research, the methodology of the designers and opportunities offered by the computer engineers. It shows that co-design makes it possible to widen the limits of each of these fields.

VÉgA is the result of a new approach in the field of social sciences and humanities, particularly in Egyptology, as it integrates design tools into scientific research making it an avant-garde method. The LabEx Archimede wanted to enlist the know-how of a company possessing some experience in research by where the Egyptologists’ requirements would be perfectly matched. The designers at Intactile DESIGN integrate pluridisciplinary teams, carrying out their creative craft with researchers and companies whom possess strong technological potential. Together, they explore the possible uses and come up with preliminary plans. The design tools allow you to quickly develop ideas and test the components, whilst micro-suitability-tests on the digital objects are constantly carried out.

Intactile benefits from being associated with a media-friendly and prestigious field such as Egyptology. The popularity of this discipline as well as its rigour and complexity is a challenge for the designers and the developers. Whilst Egyptology is a regular at museum exhibitions and well represented in the gaming industry, its scientific dimension has rarely benefited from in-depth digital design work, proving once again that design can facilitate academic research.

The development of such a project is structured around co-design and agile software development meetings. During these meetings the different components of the tool were established one by one. It should be mentioned, however, that the end result was radically different from the initial idea. The results were presented as when they were ready in the form of prototypes and then in successive versions of the software.
Barely more than one year after initially coming up with the idea, a first working version was delivered to Egyptologists in December 2014 allowing them to begin entering records into the dictionary. Over the course of the following months the tool gained additional functions, notably enabling a link between each entry, thus providing VÉgA with an encyclopedic dimension.

Intactile DESIGN‘s Intactile DESIGN’s expertise has ensured that the tool is a genuine product in terms of reliability and image: it is not merely a tool for researchers, but it is also a platform that opens up new perspectives for a wider public and one that will enable the spread of knowledge.
VÉgA invites the general public to see research under a different and more modern light.
The methodology implemented for this project involving researchers in the field of social sciences, digital designers and computer engineers, revolutionises scientific practices and shows that co-design makes it possible to expand the limits of each field. This innovative methodology, which relies on digital design centred on the user, is transferable to other spheres of research and could be applied to any situation where tailor-made tools with specific and new functions are required.

A process in images

Usage analysis is essential in order to pin point the real needs of the users: 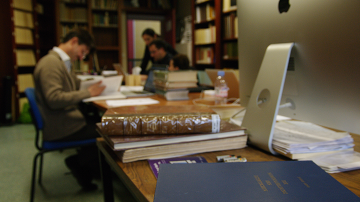 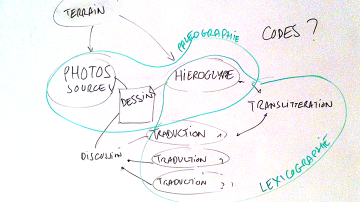 Brainstorming leads to ideas that are shared freely: 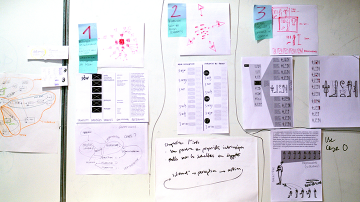 Later on in the process, paper prototypes present the actual principles behind the interfaces: 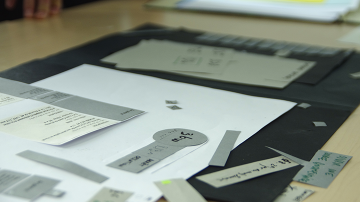 These prototypes developed over the course of the co-design sessions enabled each participant to voice their ideas: 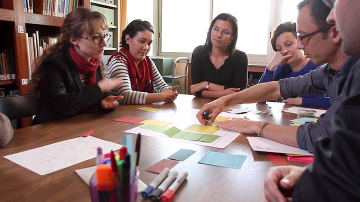 The successive versions of the storyboards and prototypes made the functionalities more and more solid until the developed version was achieved.!