Presentation of the tool

VÉgA makes it possible to model and present the evolving knowledge of ancient Egyptian by bringing together and cross-checking the words, where they have appeared, the references, their hieroglyphic forms, as well as creating links to a collection of records related to the texts in question. VÉgA is accessible using a simple web browser. There are no other installation requirements. Its interface was custom-created for the Egyptologists allowing them to easily and quickly create interactive notes. You are experiencing a problem? Contact us at contact@vega-vocabulaire-egyptien-ancien.fr 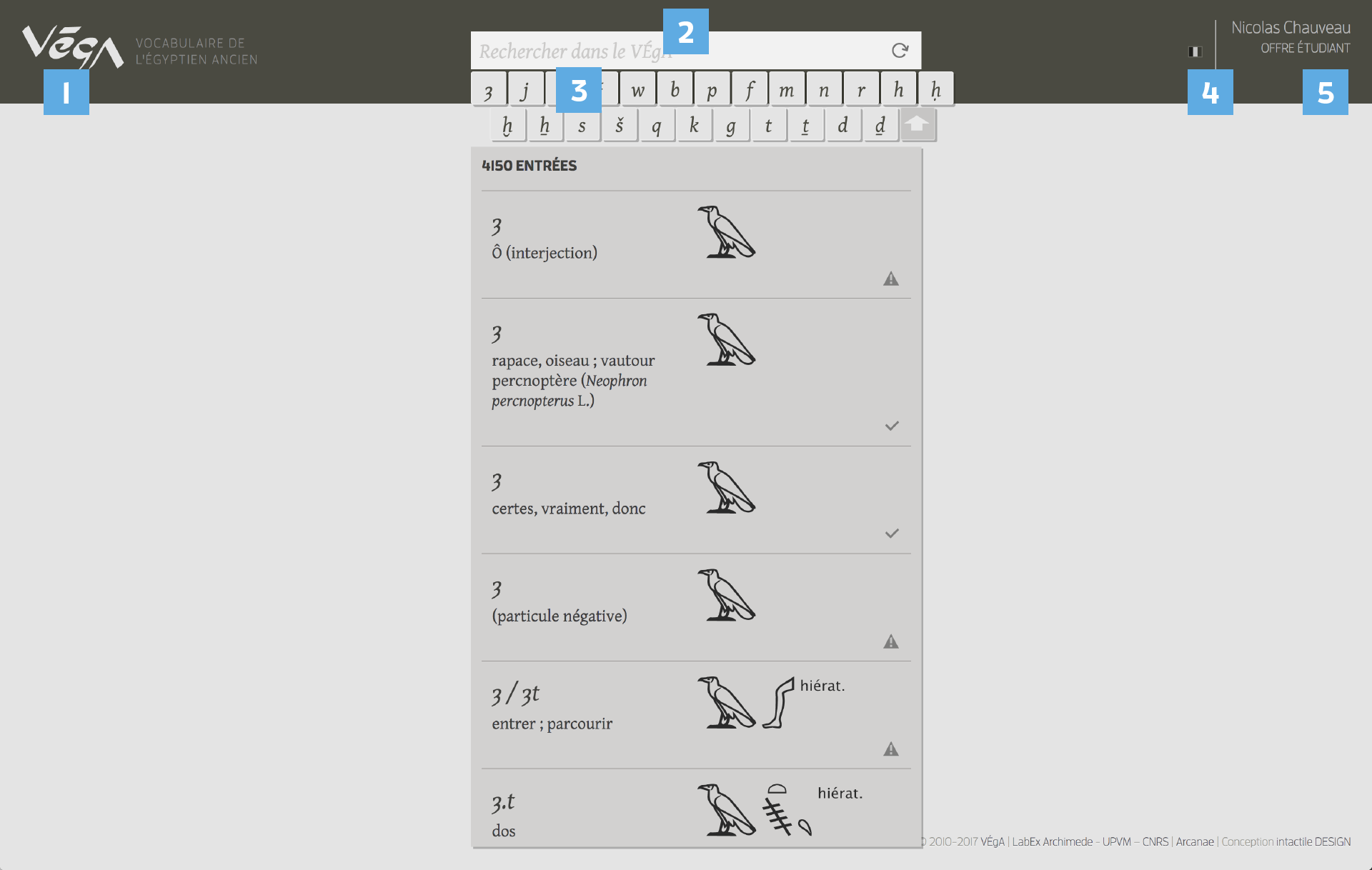 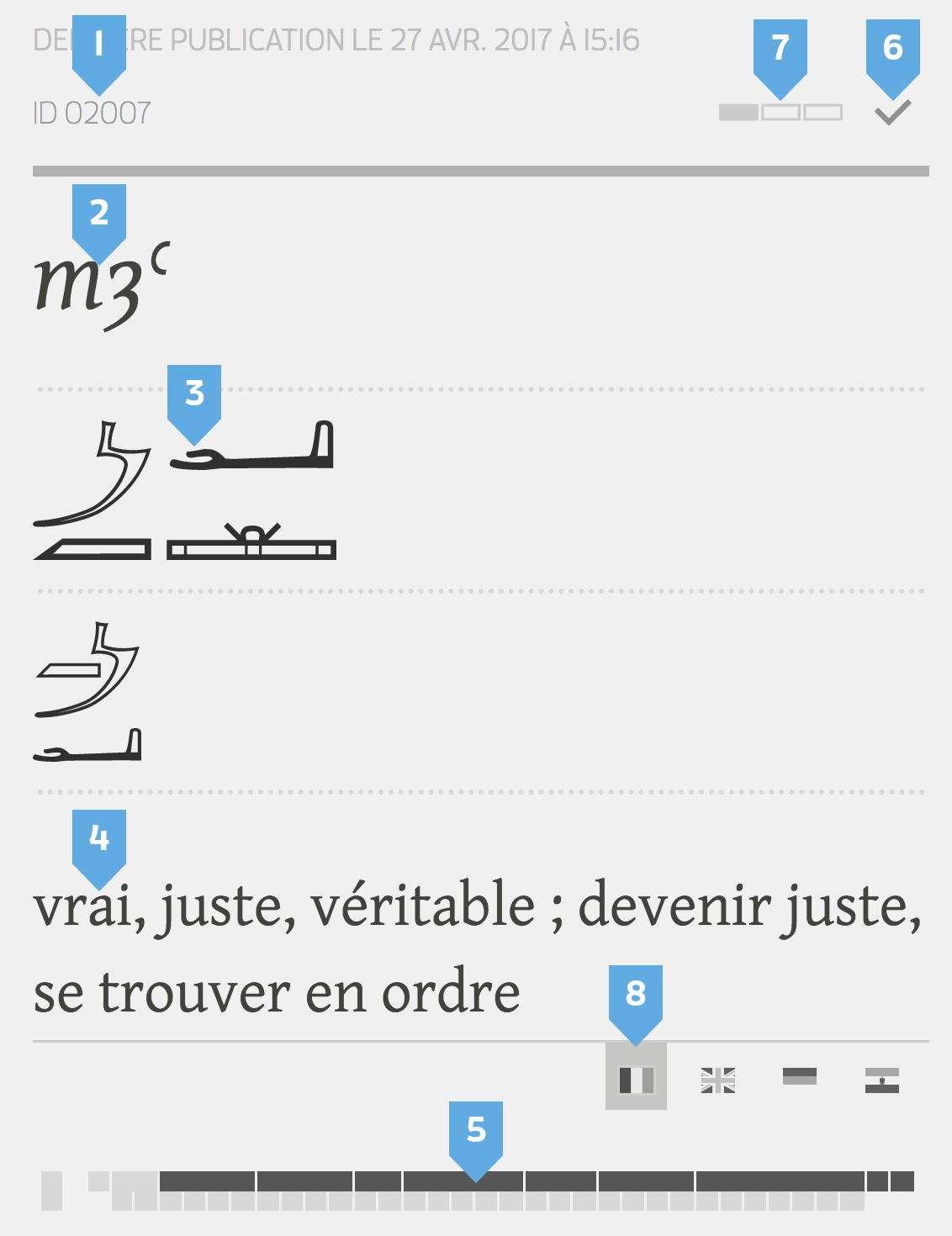 1. Unique identification number of the entry
2. Word in transliteration
Words are translitered after the available sources. In the case of words with few occurrences known only by specific grammatical forms, the indication is given in the « Remarks » tab. The [/] is used in the following cases : variants grouped under the same entry by dictionaries and are therefore not the subject of separate notes ; when masculine and feminine are grouped under the same entry.
3. Main hieroglyphic Forms
Written forms most featured in the dictionaries ; the most atypical ones are recorded in the Catalogue of hieroglyphic Forms. The mention « hiérat. » means that this form is from a hieratic source.
4. Main translations
They are mostly those listed in the reference dictionaries and glossaries. However, they can be updated according to specific studies, mentioned if so in the « Remarks » tab. Substantives are without article. The use of the parenthesis, with or without indefinite article, is reserved for the case when only the word’s general category is known but not a specific translation, or for grammatical particles and interjections. The indication « (meaning unknown) » means that the word is well attested but the translation is unknown. Finally, the sign [–] marks a word listed by the dictionaries and glossaries without translation or wrongly recorded.
5. Timeline of attestations periods
The timeline only appears on the non-exhaustive notes when the word is only known by one, or a very few, attestation(s). With an exception for the Pyramids Texts, the Coffin Texts or the Book of the Dead, due to the wide spread in time of the sources. On the other hand, the timeline is mandatory in the exhaustive lexicographical notes.
6. Indicator of the note’s state of validity
Case 1 › Valid : existence and meaning of the word verified and validated.
Case 2 › Problematic : existence of the word verified and validated, but the hieroglyphic form, the transliteration and / or the translation are problematic. The matter is exposed in the « Remarks » tab.
Case 3 › Erroneous : existence or meaning of the word deemed erroneous by the VÉgA publication committee. The rectification is given in the « Remarks » tab. The distinction is made between erroneous entry and erroneous word. The erroneous entry usually refers to a word that exists but has been misread or misinterpreted by an author; the erroneous word is a word that does not exist, most often resulting from a wrong cutting of the text by an author.
7. Indicator of the state of progress on the word’s study
The work progress is determined by three grades :
1st grade : Status of the non-exhaustive notes, as produced by the VÉgA publication committee.
2nd grade : the note is still available for consultation, but has been assigned to a contributor in charge of the lexicographical study.
3rd grade : status of the exhaustive lexicographical notes, signed by the author contributor. All informations about the word have been recorded and updated.
8. Language selection
Access to the translation of the word in the four languages available in VÉgA (French, English, German and Arabic). 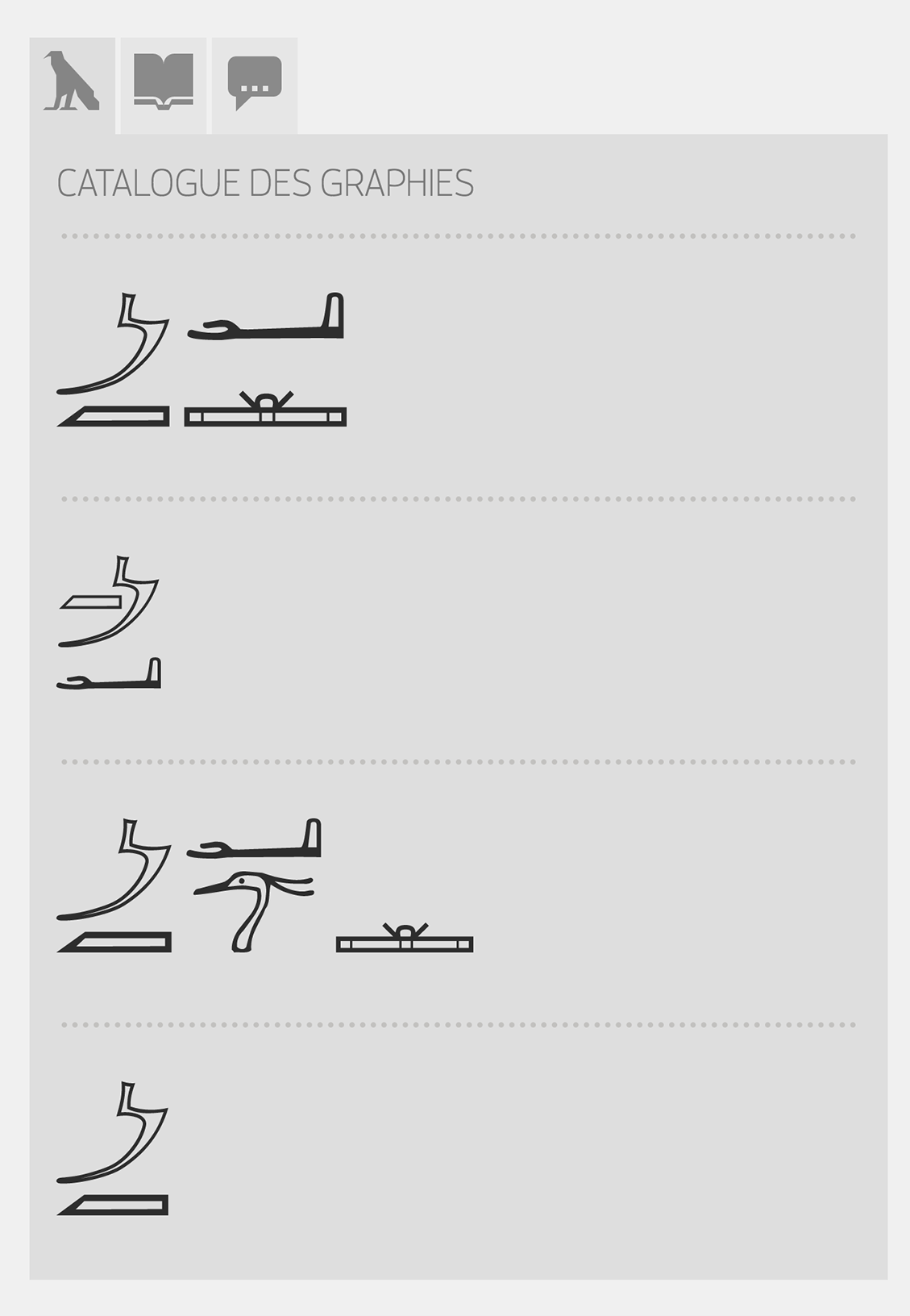 Grouping of the most usual hieroglyphic forms of the word or the most atypical. 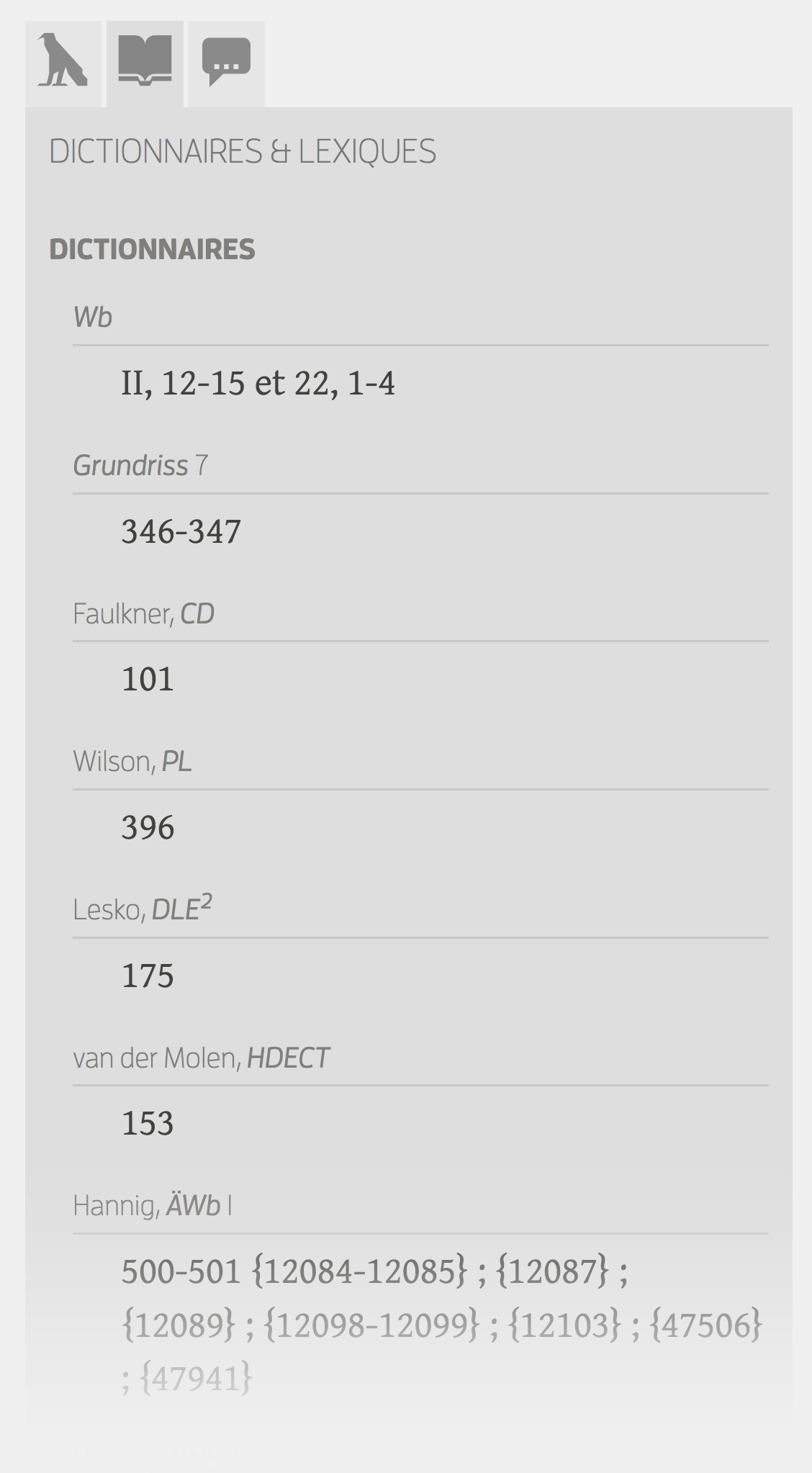 Grouping of all the occurrences of the word in the reference manuals (cf. List of the dictionaries and glossaries used in VÉgA). The complete bibliographical reference of each source appears in roll-over, by passing the cursor on the abbreviation.
Other references : arbitrary list of books covering as many subjects and disciplinary fields as possible, intended to evolve regularly.

This tab contains information of several types depending on the case :
– grammatical class of the word when it can be misleading ;
– source of unique attestation and relevant bibliography ;
– characteristic nuances and metaphorical uses when they are far from the original meaning ;
– noteworthy expressions ;
– specific publications ;
– links toward other notes (same lexical field, research leads, etc.).
This tab is automatically displayed if a note is deemed problematic or erroneous.

The hieroglyphics that currently exist on VÉgA have been generated using the JSesh, created by Serge Rosmorduc.
The font used for the transliteration is Gentium Plus, a typography created by Victor Gaultney. Gentium are open source fonts released under the SIL Open Font License (OFL).