The History Behind the Project

There is no one dictionary or glossary that provides up-to-date knowledge of Egyptology, either because the dictionary in question is obsolete or because it reproduces old translations that have not yet been properly assessed. This is where the idea of developing a project focused on the Vocabulary of Ancient Egyptian originated.

Researchers today are confronted with vast amounts of scattered documentation, which is difficult to manage and is enormously time-consuming. The only exhaustive dictionaries written include the old Berlin dictionary: the Wörterbuch der Ægyptischen Sprache (five volumes published between 1925 and 1931) and R. Hannig’s dictionary (Ägyptisches Wörterbuch I. Altes Reich und Erste Zwischenzeit [1 vol.] and II, Mittleres Reich und Zweite Zwischenzeit [2 vol.]; III. forthcoming), which is ongoing but difficult to use. The Wörterbuch der Ægyptischen Sprache remains, despite its age, the indispensable reference source for any lexicographical work. It has been edited over again and is now out of print. This monumental five-volume dictionary, to which we must add the seven volumes of the Belegstellen, essentially presents the knowledge accumulated before the First World War. Since then, new words have been discovered, and new analyses have changed the translation of certain vocables already attested, and have even ruled out some words that are now deemed non-existent.

Other dictionaries and glossaries have since been published but they are all specialised in some way. They either focus on a particular phase of the language – Archaic language, Middle Egyptian, Neo-Egyptian, Demotic –, or on an aspect of the Egyptian civilization such as minerals, botany, medicine, administrative titles, or even on a corpus of texts. To produce these dictionaries or glossaries the lexicographical analysis is often not carried out from scratch but instead earlier works are used without being reassessed.

Egyptology is therefore considerably behind, particularly because epigraphy remains an essential part of this discipline. Researchers are thus faced with a scientific barrier forcing them to work with obsolete tools that carry the risk of error and loss. Furthermore, the highly dispersed nature of the documentation, dictionaries and glossaries makes training students and doctorates difficult, as finding their way around this accumulation of works is not an easy task.

The delay in the lexicographical treatment of the documentation and in some cases its reassessment is such that creating a new dictionary has become an up-most priority. 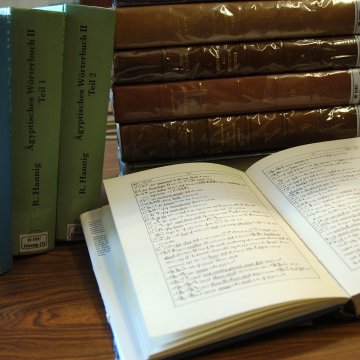